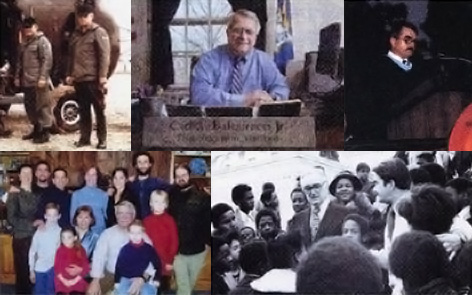 This fund is a fitting tribute to a man who has positively touched numerous lives during many years of public and private service to the Town of Guilford and its citizenry.

In accordance with Carl’s wishes, the fund is designed to address Guilford’s needs in the following four specific areas: military veterans and their support network; those with special needs, with an emphasis on children and their families; scholarships to Guilford High School graduates pursuing post-secondary education in government, public policy, foreign service, social studies or special education; and finally, support of commemorative endeavors throughout the Town of Guilford.

A brief glimpse into Carl’s past, offers some insight into the issues and causes that are near and dear to his heart.

Carl was born in 1940 and would be the first to say that his early childhood was shaped by the drama surrounding World War II. In fact, both of his parents worked at Guilford’s defense plant, New Departure. At the age of 19, Carl enlisted in the U.S. Air force and served two terms in West Germany at the height of the Cold War. He was honorably discharged with the rank of Airman First Class in 1964.

Following his military service, he pursued his education at Southern Connecticut State University where he earned a B.S. degree in special education in 1967. Following this, Carl taught for nine years in the New Haven City School system (while concurrently earning his M.S. and Sixth Year Diploma). He came to the Guilford School system in 1976. His career in education culminated with serving as the Principal at Baldwin Middle School from 1991-1994 and Adams Middle School from 1994-1999.

Carl’s interest in public service took root in the late 1960’s. Notably, he worked on the campaigns of U.S. Senator Abraham Ribicoff, Congressman Emilio Daddario and Governor Ella Grasso. Commencing in 1977, he served on the Guilford Police Commission for nineteen years. From 1969-1972, he served as Co-chairman for a committee that resulted in a family of organizations now known as SARAH. He capped off his public service career with three terms on the Guilford Board of Selectman (two as First Selectman).

As of 2009, Carl officially joined the ranks of the “retired”. Obvious to all that know him, this label is a misfit. Through Carl’s dedication to volunteerism and this fund, Guilford will surely benefit… now, and for generations to come.