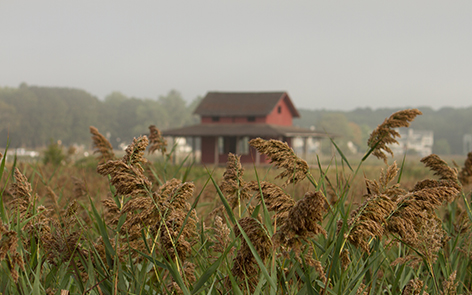 This is a designated fund established to provide permanent resources to maintain and protect Grass Island and its red “shack.”

Built in 1930, the tiny, barn-red shack across from the town marina is a magnet for photographers and artists. Given to the Town of Guilford in 1963, the empty, weathered shack fell into disrepair over the next three decades. In 1996, resident Richard Werle, who passed away in 2014, founded “Save Our Shack,” raising $10,000 to shore up the structure.

By 2015, time and two hurricanes had once again twisted the shack back into a state of crisis. As a 16-year-old Eagle Scout candidate, John Markowski mounted an ambitious “Save the Shack” project. With no town funding available, John’s goal was to raise thousands of dollars, purchase materials, gather construction volunteers and establish a fund to provide for future maintenance.

“In the beginning stages, people were asking if it was too big of a project for an eagle scout,” John recalls. “As we were starting the fundraising phase of the project, The Guilford Foundation was one of the first organizations in town that reached out to me and said, ‘We’re here and we want to help.’ It was big sigh of relief to know we had their support.”

“Having The Guilford Foundation behind us kind of gave us the seal of approval we needed. It not only helped us with raising money; but with the marketing end — getting the message about the project out there,” says John.

In the future, thanks to GF, Guilford’s iconic Grass Island shack won’t fall back into crisis. The GF challenge grant not only matched every donated dollar up to $10,000; but also helped establish a Grass Island Shack Fund for future maintenance.

“The fund is going to stay in place, so money is going to be there in the future for repairs,” John says. “That didn’t exist before this project. It’s great knowing there’s money set aside through The Guilford Foundation to ensure that.”